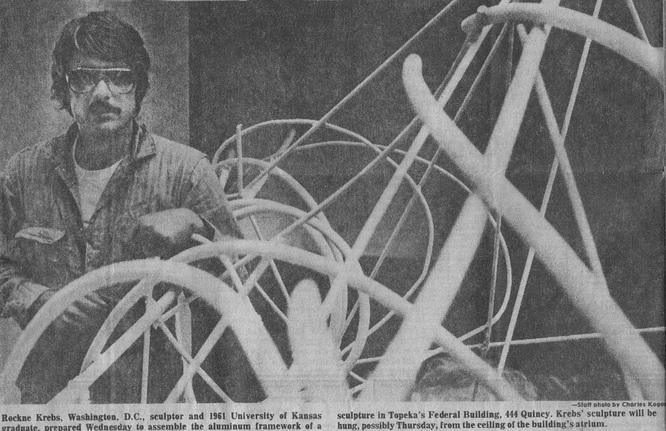 Viglucci, Andres. Miami Herald, July 13, 2016. From giant orange peels to home-run sculptures, this is art you paid for.

Argetsinger, Amy. The Washington Post, April 4, 2016. Here’s what the dazzling 1989 Robert Mapplethorpe protest at the Corcoran looked like.

Fishman, George. Miami Herald, October 17, 2014. Buying art is just the first step. You have to make it last.

Johnson, Neil. The Shreveport Times, April 16, 2014.  The Neon Bridge revisited.  "Shreveport/Bossier's Texas Street bridge glows from the neon lights that were installed in 1994."

Schudel, Matt.  The Washington Post, October 28, 2011, Obituary, Rockne Krebs, 72, D.C. Artist Created
Sculptures with Light, p. B7.  “Mr. Krebs was one of the few artists of the time to use the power of light as a primary artistic palette.”

_________.  Miami Herald, March 25, 1988, Metrorail Bridge Lights On Again, “Miami's electric signature was switched back on Thursday night, and it identifies the Magic City five times more emphatically than it did before. The red, yellow, blue and purple neon tubes along both flanks of the Metrorail bridge over the Miami River.... It's more than a quarter-mile long, five times longer than the original 300-foot display that first captured the downtown skyline in 1984. ...” p. 4D.

Richard, Paul. The Washington Post, October 17, 1986, The Nesta Revival, A Gallery Pioneer, Back at Jefferson Place, pp. B1 and B3.

Allen, Jane Addams.  The Washington Times, _____, 1985, Innovator used Color for Structure, Thomas Downing, Washington Color School, obituary article, pp. B1-B2.  “Rockne Krebs called Mr. Downing ‘the most accessible of the color school artists.  When Krebs was just  getting started, the older artist spent hours with him, talking to him about art.  Sam Gilliam and I frequently met at his apartment.’  Although not everyone appreciated Mr. Downing’s ruthless honesty, the young sculptor feels that he benefited from it:  ‘He would come to my studio and talk about my art with me.  He was pretty candid and it was very useful.’”

Gilson, Nancy.  Columbus Citizen-Journal, May 27, 1982, Laser puts idea of art in a new light, p. 18.
The Green Verb, ‘The “verb” of the title is the laser;  the subjects are space, light and color, and the predicate is the architecture of space, Krebs said.  The title also is a compliment to cooperative Ohio State Library personnel who work in the Front Street building, Krebs said.  ”I like to find a place that gives me two good, clean moves – like a chess game – then work from there,” he said.  He turned down an opportunity to tour with the Rolling Stones, explaining that rock artists want “flicker and flash” and the “situation simply didn’t lend itself to making art.”’

De Witt, Karen.  The New York Times, June 5, 1980, Sculptures Crop Up In Capital for Conference; Lasers and Monuments, p. C19.  "One of the most spectacular works is Rockne Krebs's "The Source," a laser structure that utilizes the city s most famous monuments, the ...”

Forgey, Benjamin.  The Washington Star, June 28, 1980, A Complement To Cityscape, Laser Beam Lights the
Nighttime Sky, pp. B1 and B5.

Reyonlds, Gary.  Daily Iowan (Iowa City, Iowa), December 17, 1980.  Major American artists explore ‘the
intimate medium’ in print show, p.11.  “25 prints by 21 of America’s most influential artists….Prints from the
permanent collection of the Walker Art Center at the University of Iowa Museum of Art…represents the late ‘60s and early ‘70s.”

Forgey, Benjamin.  The Washington Star, November 14, 1980, Artful ‘Rainbow’ for a Place of  Beauty. "Rainbow
Green, in short, is a quietly incandescent spectacle.  It enhances one’s awareness of time, movement and space, and does so in a place that is enchanting on its own.” Rainbow Green-My Dream of Rousseau, prism solar installation, U.S. Botanic Garden, Washington, DC.

Editors.  The Baltimore Sun, December 25, 1977, ‘Happy Night’ at the Harbor.  “A laser beam sculpture being executed by artist Rockne Krebs will light the skies of the Inner Harbor...”  p. H6.

Woodhead, Henry.  The Atlanta Journal and Constitution Magazine, December 19, 1976,  Art From The Sun (And Other Bright Source), an artist comes to light, cover story and pp. 6-8.

Richard, Paul.  The Spokesman Review, Spokane, Washington, December 12, 1976.  Sunlight, laser art featured in spectacular Atlanta hotel, p. B23.  “The bellhop calls them sunflowers, the desk clerk calls them rainbows…Krebs has made two works in this airy, light-filled, 14 story space, a sunlight piece for daytime and a laser piece for night….but “Atlantis,” his sun piece, has no edges.  Its geometry is temporal.  It cannot be seen at once or in one day or month.  It is not the same in summer as it is in fall….Krebs spent three years figuring out the year-round patterns they paint.  Some of his prisms catch the sun only two hours every year.  Certain walls are painted at certain times of day.  And then there is the eye….It is a portrait of the eye of the artist’s daughter, Heather.”

Secrest, Meryle.  The Washington Post, December 25, 1974, Christmas Past, with Inspiration from Christmases Past, pp. C1 and C15.

Editors.  The Philadelphia Inquirer, May 18, 1973.  Exciting Laser Display from Art Museum to City Hall. “The secret is total domination of all visual competition with this weightless and insubstantial art form….Under the spell of laser magic, the solidity of the city vanishes.”

Brown, Warren.  The Philadelphia Inquirer, May 18, 1973.  Museum’s Laser Art Is Attention-Grabber, ‘Sky PI’ Light Sculpture Arouses Pros and Cons Nightly.  “To its creator, it is a “light sculpture.” To its viewers, it is a source of debate, a chance to discuss “photon energy potential,” and an excuse to stroll along the steps of the Art Museum late at night.”

Editors.  The Germantown Courier, Philadelphia, PA, May 17, 1973. Artist Rockne Krebs and David Katzive of the Philadelphia Museum of Art.

Forgey, Benjamin.  The Evening Star and The Washington Daily News, May 14, 1973, A Spectacle of Light, Portfolio section, p. 1.

Editors.  The Philadelphia Inquirer, May 13, 1973.  Beams of Light by laser sculptor Rockne Krebs.

Ryan, Desmond.  The Philadelphia Inquirer, April 30, 1973.  Laser Beams Will Light Up Art Museum in May Festival.

Editors. Washington Evening Star & Daily News, October 25, 1972.  Art for McGovern 1972, The man who turned laser beams into an artistic accomplishment will have a grim exhibit in the Art for McGovern.“ He plans to have it flash once every second for as many seconds as there have been lives lost in the Vietnam war…he will have to keep the beam flashing all night…”

Kramer, Hilton.  The New York Times, May 12, 1971, Art and Technology Exhibit Opens at  LACMA, p. 50.  "In this respect, the most important contributions to the exhibition are those of Newton Harrison, Rockne Krebs, Boyd Mefferd, Claes Oldenburg,... "

Frankenstein, Alfred.  San Francisco Chronicle, May 16, 1971, Out of the Wood – Art and Technology.

Seldis, Henry J.  Los Angeles Times, June 7, 1970, The Art of Tomorrow.  “Moonrocks are not the only exclusively American firsts at Expo ’70 in Osaka.  High on the list of magnetic attractions in the American pavilion is the Los Angeles County Museum of Art’s unprecedented Art and Technology display…Together with pioneers of outer space these inventors of new experiences are utilizing advanced technology…Experiences at the display include Rockne Krebs’ laser...” p. N62.

Forgey, Benjamin.  The Washington Star, August 11, 1968, Krebs at The Washington Gallery of Modern Art.  “Rockne Krebs is a visionary, really.  No one in my experience ever took the trouble to call searchlights art,
not until three weeks ago, when Krebs rented a two-searchlight truck.”