Krebs regards drawing as more than the mere record of a concept.  In his words, it is “a whole thing in itself.”  He goes on to describe it as “the place where I thrash around for at least 100 hours.  I am making very serious decisions about the piece but the image of the drawing is ultimately the only thing I am interested in for this piece of paper.” 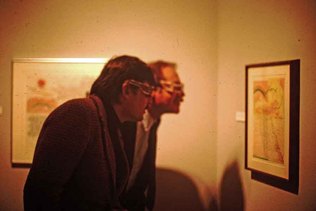 A love affair is a correct description of how I have dealt with making drawings. - Rockne Krebs
Belloli, Jay.  Rockne Krebs: A Retrospective of Drawings, 1965-1982, 1983. 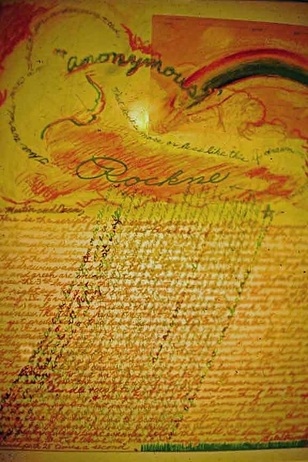 "In the drawing Anonymous, Krebs examines cursive
writing as a combination of anonymous origin and individual expression.  This graphic work has four visually
distinct layers and can be totally understood only with
3-D glasses.  One part can be seen with normal vision, one with the glasses’ red lens, one with the green lens, and one using both lenses at once.   The sculpture Anonymous that results from this drawing made use of a scanning device (which Krebs developed with Bart Johnson, an engineer) that created a memory for a laser beam.  The piece spelled Krebs’ signature in laser light." 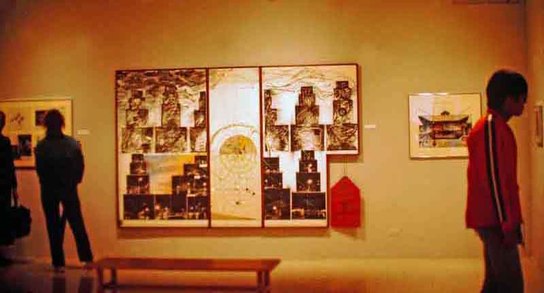 "Krebs clearly loves to draw, and his works on paper, at the very least, should be considered an important part of his achievement.
The drawings often serve, as one might expect, to examine ideas or  details for his usually transitory sculpture, or explore new concepts in
general, and there are often areas of writing which discuss the visual proposal shown on the same page.  But frequently, at the same time, these pieces can be drawings in the full sense of the word, works on paper that delight in their qualities of line, composition, and color as they convey information for the development of Krebs’
three-dimensional art.  Often interaction occurs between the sculptures and the drawings: a drawing and its
accompanying text might lead to a piece, and, following the sculpture’s creation, Krebs might come back to do other drawings about what worked in it and what didn’t, leading to other sculptures, and so forth.  A number of pieces proposed graphically have obviously not been made, and given the generally transitory nature of his art imposed by artistic and real-world considerations, the drawings are (other than the beautiful slides he
takes) often the only documents that exist of his completed work." 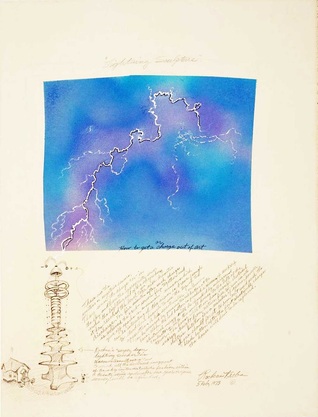 Lightning Sculpture,1973.
"The personal elements were expressed mainly in drawings and in three-dimensional pieces he titled (from his boyhood in Missouri) the 'Home on the Range' series. Fantasy was one way out – on paper he imagined vast, impossible structures such as a 'Sun Pyramid,' and potentially fatal ones such as 'Lightning Sculpture,' and brilliant, barely possible inventions such as 'A Rainbow Tree.'