"I think of these as pieces which you experience in total but
see only in sequence or passages.  The experience is a remembered
experience, almost as a piece of music of which you hear the progression.
In this case, you see the progression of the piece and your final total experience
is one of memory." Rockne Krebs, 1970

"Rockne Krebs principally sculpts with light, though he has worked in a variety of media.  His objective is to define space and mark time. Though some hardware is always necessary to his sculpture, the work itself consists only of light.  The light generally takes two forms, one natural, the other technological.  Working with the  existing landscape, he transforms it, playing the variability of light  conditions against a formally rigorous system of mirrors and laser lights. This creates structures which appear solid and stable, but are actually immaterial and subject to atmospheric conditions."
Reid, James Earl.  Sculpture Today/Traditonal and Non-Traditional, exhibition catalogue, 1980.  The Art Gallery, University of Maryland, College Park, MD.
"In the 1960’s lasers became available to the artist.  Lasers have been used most characteristically to create spectacular nocturnal displays, the pioneer in this field being the American artist, Rockne Krebs (1938-2011)."
Chilvers, Ian (Editor).  “Light Art,” A Dictionary of 20th Century Art, 1999. 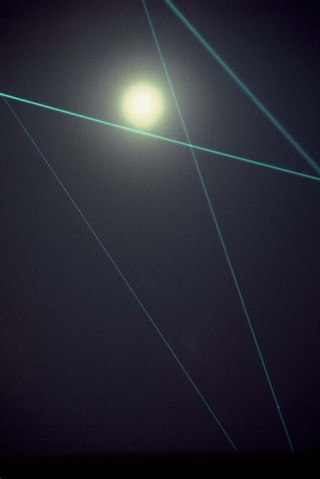 The Source, 1980. Washington, DC.
‘Rockne Krebs is recognized as one of  Washington’s
finest artists.  Krebs “Of the 38 major pieces I’ve made
in the last 10 years, two still exist.  Perhaps I ought to
start making still-lifes of flowers.”’
Richard, Paul.  The Washington Post, October 2, 1977,
Making It as An Artist.


"The Source by Rockne Krebs, a kind of weightless sculpture made of glowing laser beams that floated in the evenings above the greensward of The Mall, was among the most beautiful.”
Richard, Paul.  The Washington Post, March 27, 1990,
Sculptors’ Conference to Return to Washington.


"In his homage to the founding fathers of our country, entitled “The Source,“ Rockne Krebs bounced a laser beam off the reflecting pool between the Lincoln Memorial and the Washington Monument.”  (10’ x 4' mirror in the middle of the reflecting pool.)
Editors. Optics & Photonics News, OPN, March 1996, Vol.7 No.3, After Image.
The Tampa Tribune,  November 6, 2013,
1977 artist’s work debunks rumor of UFO in St. Pete, by Paul Guzzo
Documentation of a 1977 installation by laser artist Rockne Krebs was recently mistaken for documentation of a UFO landing. A Florida newspaper debunks the myth.
Slides by Rockne Krebs, taken between 1975-1977 of his work,
The Laser and Star Board Home on the Range, Part VI, St. Petersburg, FL.
Slides were taken with long exposures at night; the effects have an ethereal quality.