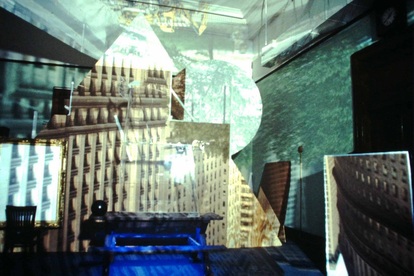 Krebs appropriated for this piece an ideal site for public sculpture - Downtown Manhattan's Bowling Green - and optically brought it indoors…spreading a cinematic panorama, in varying degrees of distortion, over walls, floor and ceiling. The ceiling, in addition to an inverted projection, received a right-side - up reflection from a mirror placed at an angle beneath the lens, collaging blue sky and building tops upon upside-down pedestrians moving along the pavement. Talcum powder clouds sprayed on the carpeting mimicked images of their natural counterparts floating overhead…

This optical extravaganza was, however, only part of the piece.  It also served as a stage set for a sculpture that gave the work its name: a Cubist-inspired, transparent plexiglass riderless horse, perched on a wooden picnic table illuminated from beneath by black light.  The plexiglass permitted light to pass directly through the horse, causing no disruption to the images projected onto the structures behind.  Standing 8 ½ feet high on the table-base (the legs of which are finished with carved hoofs), and with one "toe" (as Krebs calls it in his notes) poised Gattamelata-like on a bowling ball, the horse has a plexiglass pinwheel head and chrome tail; this doubles as the crank for an old Victrola which kept playing Red River Dave's rendition of "Home on the Range."

To elucidate the full range of ironic visual metaphors and dualities of The Equestrian would require more space than is available here.  My own initial response was one of sensory bombardment- a feeling of being unable to sort out and account for the welter of information contained in this chaotic "landscape."  Having identified
its elements, how does one construe such things as the formally apt, symbolically absurd substitution of a cannon ball by a bowling ball?  ls it simply a pun on the Bowling Green location?  What of the artist's invoking Monet and Donatello?  Does the pin-wheel allude to Don Quixote?  Where is the equestrian?  And so forth.  Gradually, a mock heroic eloquence settled on the piece, which began to read as a wry commentary on the increasing obsolescence of certain traditional forms of art - sculpture in particular-in today's  world.” 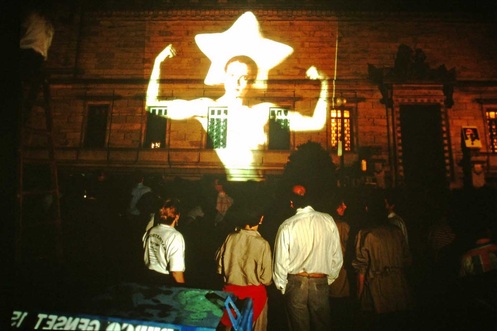 A Robert Mapplethorpe self-portrait projected on the museum’s wall. “Laser Artist Rockne Krebs projected a huge, ghostly image of the dead artist on the stately façade of the building.” Newsweek, October 9, 1989, Corcoran Showdown.
All Photographs by Rockne Krebs