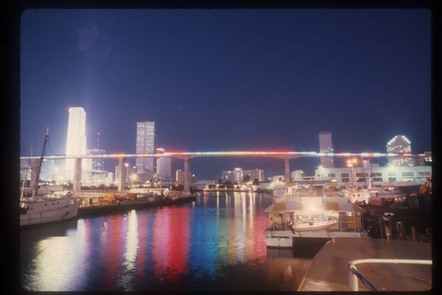 The Miami Line, Miami, FL.
"Miami’s Art in Public Places program began nearly 40 years ago.  Today, there are more than 700 installations out there in our midst—and  counting.  The hammered glass mural tapestries of the Bacardi Building on Biscayne Boulevard, the brilliant red horse and sunny yellow giraffe metal sculptures in Bayside Park in the Grove, Rockne Krebs’  iconic The Miami Line, a multicolored light installation that stretches 1,540 feet across the Metrorail bridge over the Miami River and lets you know, lest you forget, that you are in The Magic City.  Krebs’ originally put down 300 feet of lighting when he finished it in 1984, but since then, it has been extended exponentially—as has the Miami-Dade Art in Public Places program that brings the city such aesthetic inspiration." 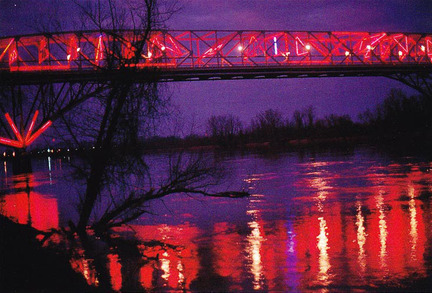 The Red River Bridge, Shreveport, LA.
"….and here I will finally mention some earlier – 1990’s public art by the Washington-based lightwork artist Rockne Krebs, whose laser piece for the Olympics I was unable to see, thanks to the long lines at CNN building security; if you have any occasion to pass through Shreveport, Louisiana, Krebs’ neon installation on the Texas Street Bridge is one of the most successful pieces of its type I have seen in recent years.  Too bad its triumphs of scale and proportion
don’t show up well in photographs;
it’s a stunner."

Cullum, Jerry.  Art Papers Magazine, November/December 1996, or, the Real Lives of Art Critics, p. 7.
"Originally constructed in 1934, the cantilever-through-truss bridge underwent major rehabilitation fifty years later.  Rockne Krebs, notable pioneer light artist and sculptor, came up with the bright idea of creating a laser sculpture of brilliant neon lights and fiber-optics cables that at night transform a functional bridge into a majestic work of public art.  Boasting more than seven thousand feet of neon, the Texas Street Bridge Lighting Project is the largest neon sculpture in the United States.  In 1971 Krebs had brought his cutting-edge design technique to the New Orleans Museum of Art, creating Rite of Passage, only the second "nocturnal urban laser display" in the country (the first was by Rockne in Buffalo, New York).  Rockne has created urban-scale laser
installations in over twenty-five cities, and some of his smaller works are in the Smithsonian American Art Museum.  The Red River, known for changing course and forming new channels, is an important area waterway that begins in eastern New Mexico and winds its way through Louisiana, picking up iron oxide-rich alluvial soil (giving the river its reddish appearance and name) before finally emptying into the mighty Mississippi River."

All Photographs by Rockne Krebs